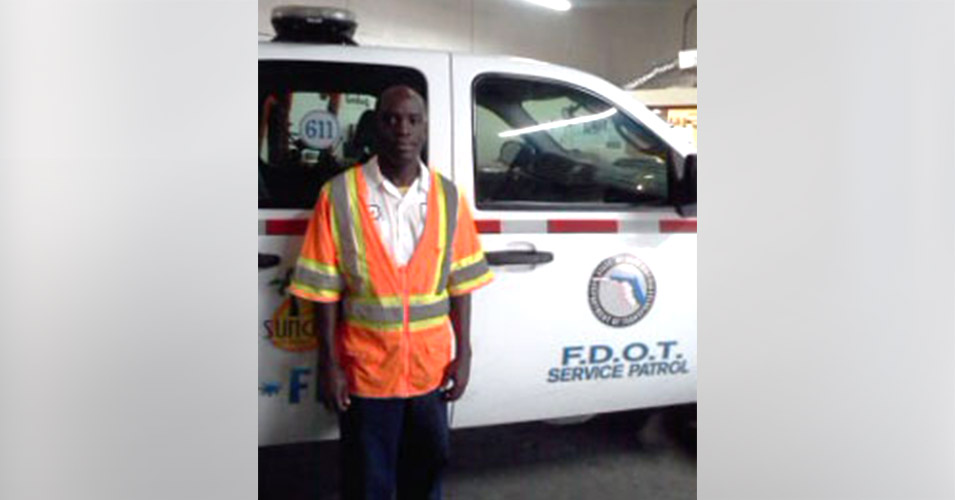 Hebert Gedeon was selected as Road Ranger of the Month for his exemplary performance during August 2012.

He has been a Road Ranger for nearly a decade, covering nearly all of District Six’s roadways. Currently, he may be seen patrolling State Road 826 (Palmetto Expressway) in a pick-up truck, assisting motorists in need and keeping the roadway clear of obstructions. His coworkers say he was selected as Road Ranger of the Month because of his selfless attitude. He is always willing to “give the shirt off of his back” to help others. Hebert says his fondest memory as a Road Ranger was when he assisted an elderly woman on Interstate 95 (I-95) whose vehicle had a flat tire. Initially, the woman was scared and did not want to let Hebert change her vehicle’s tire, as she thought he would be in too much danger.

Hebert calmed the motorist down and explained that he would approach the situation with his and her safety first. He calmly set up his maintenance of traffic (MOT), positioned the vehicle in a safer manner and proceeded to change the tire. The woman was so thankful that she called Hebert’s supervisors to praise not only his work, but his calm and helpful attitude as well. Please join us in congratulating Hebert for the integral role he plays in keeping South Florida’s motorists safe and its roadways clear!