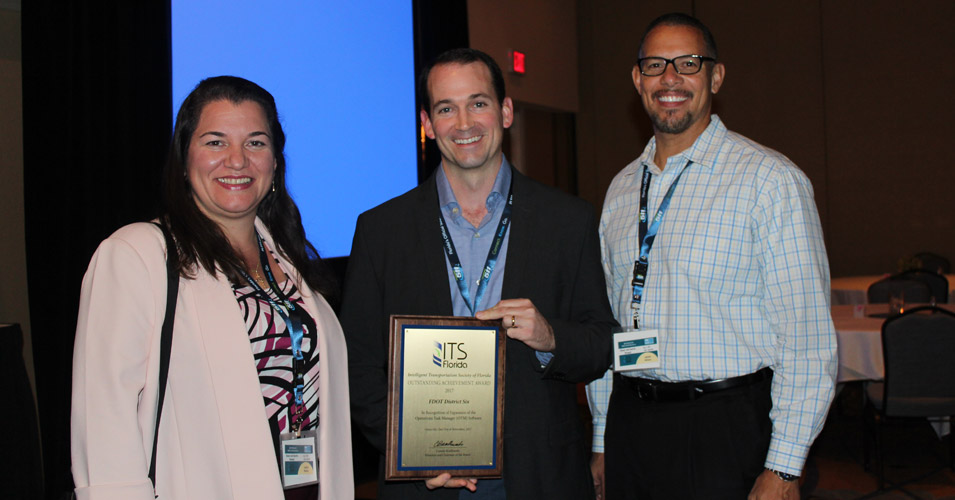 District Six was recently given an Outstanding Achievement Award from ITS Florida for ‘The Expansion of the Operations Task Manager (OTM) Software’ at their annual meeting in November.

The award was given because FDOT selected OTM as the official software application that will manage express lanes projects for all the districts across the state.

OTM was originally created in 2008 by in-house District Six staff to support the 95 Express Pilot Project in Miami-Dade County. Back then it was mostly used to set the project’s dynamic tolling, monitor performance and generate reports. It has been enhanced throughout the years to support additional project needs such as customer service and its expansion into Broward County, among others. The software has been largely credited with 95 Express’ on-going success for its ability to adapt to the project’s changing needs throughout the years.

District Six staff has worked with FDOT and the Statewide Express Lanes Software Team to help with software transition to Florida’s Turnpike Enterprise (FTE), which will be taking over the responsibilities for software support and enhancements statewide. District Six staff has facilitated meetings, assisted with deployment efforts, updated user manuals and given hands-on trainings to ensure a smooth implementation and user success. The software is scalable to meet individual project needs and will soon be used to manage FTE’s Veterans Express Lanes and Homestead Extension of the Florida’s Turnpike (HEFT) Express Lanes, District Two’s I-295 Express Lanes, District Four’s I-75 Express and District Six’s Palmetto Express among others.

In addition to its express lanes management function, OTM features eleven additional modules that support the District’s traveler information, incident management, and ITS maintenance services as well. Some of these modules are already in use by partner agencies such as Miami-Dade Expressway Authority and the SunPass Customer Service Center.

To view a video of OTM, please click here.