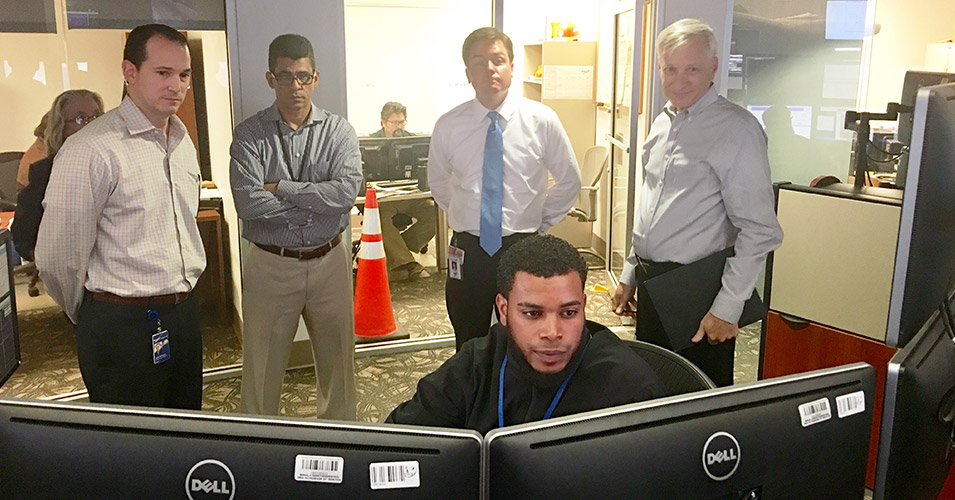 On Wednesday, July 12, District Six staff hosted the newly-appointed Florida Department of Transportation (FDOT) Secretary Mike Dew for a tour of the SunGuide Transportation Management Center (TMC). The stop was part of his district-wide tour across several offices in Miami-Dade County.

The visit marked his first trip to the center since being appointed state Secretary. District Six staff provided him with a general update of our program operations and services since his last visit when he was the agency’s Chief of Staff. TMC staff also highlighted the recent safety improvements along 95 Express, as well as the Arterial Management Program which launched this year.

During his tour of the control room, Secretary Dew stopped at the Arterial Management workstation, where an Arterial Operator gave the Secretary an overview of his role overseeing the Advanced Signal Control Technology (ASCT) project along SW 8 Street. His next stop was the 95 Express workstation, where he was given a step-by-step demonstration of what it takes to manage the express lanes, including accepting toll amount changes, dispatching members of the incident management team, and posting traveler information. The tour concluded at the center’s server room, where he was shown the program’s network connection and capabilities.